The past week I have been working on the Metroid drawing and have finally managed to finish it. I’ve notice that I have become much better, but it still takes me a while to make decisions regarding how to go about accomplishing what I have in mind. I have gotten much quicker and know how to get certain effects, but I’ve noticed that as I learn a new technique, another possible technique emerges. Which is good, but it does let me know just how much I have to learn. A small part of me does feel a bit disappointed that I’m not better, but I’m glad that I feel like I can still grow as an artist. One thing I’ve noticed is that papers tend to give different effects. With that in mind, I will be trying out Bristol paper that seems and feels much better (time will tell). In any case here is the Metroid drawing.

So as many people know, Metroid is based on the Alien franchise. Can you believe that I just barely saw those films last year (only the first three, and I believe only the first two are the one’s to watch). Anyway, they both take the viewer to places that explore our fear of being isolated and in constant danger from an unknown force. So I decided to use that as a base for this drawing. I first contemplated about having Samus in a confined area to give the iconic claustrophobic feeling of both the game and the movies (Metroid games/Alien movies). But instead settled on an open world that was isolated giving that same feeling of being alone. As for Samus Aran herself, I wanted her to be struggling in this piece. So I had her exploring the land and showing that even she gets exhausted and has to take breaks along the mission, but she is definitely not defeated. I wanted to add a couple of more effects but worried that the drawing might get too jumbled, so I decided against it. 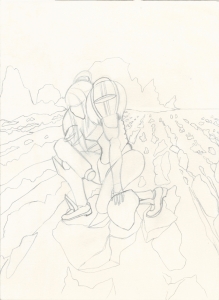 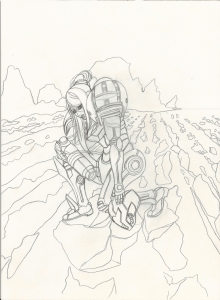 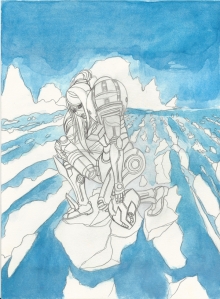 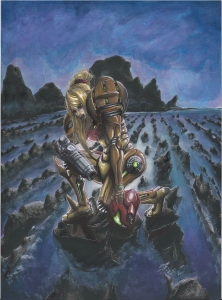 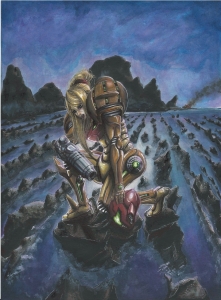