Finally done. This piece was done with a combination of both watercolor and Copic markers.

I wanted to make a drawing with a simple background, which I have a really hard time doing. So I want to now focus on these for a while so that I know how to do them. I was annoyed by how much time it took to come up with something. Keep in mind a design like this is quite easy, so finishing it in one day should be absolutely no problem. And yet the amount of time it took me to come up with something is excruciatingly slow. So really, it’s more of my mental capability to make up backgrounds that will need to be strengthened so that I can not only make backgrounds that fit with the drawing but are also interesting to look at.

Since it is done traditionally I have to rely on just my brushes and my markers. This is where I can run into problems if I want to make identical patterns. I could do it the dumb way of drawing it one by one, but that will take too long, it also wont be perfect recreations and really it would be really annoying to do it that way. So the best options are either making stencils or better yet make a stamp. Which is what I ended up doing.

And here it is (it’s made of an old eraser that I cut into shape with an e-xacto knife, sadly the eraser was too soft so it gave me problems when applying tint on it, and to make matters worse it started breaking off in the end): 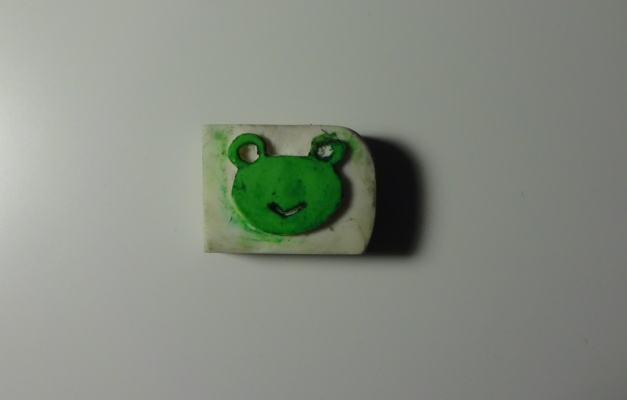 So in the end I came up with a really simple design that was brush painted in a light green. From there I decided to make the Gekota stamp to make reference towards Misaka’s adoration to anything Gekota so that way I can connect why she seems to be entranced by Tsuyu Asui, definitely one of my favorite characters from Boku no Hero Academia.

Now, why are there other Misakas? To be honest my original plan was something a bit different. And that had to do with having the background filled with Misaka imoutos (younger sister, aka Misaka clones). For that idea I was originally thinking of making a stencil with the figure of an imouto, then reproducing it on the background to give it a somewhat cute/creepy mood overall. In the end I opted against it and went for a much simple design which funnily enough took me more time to come up with… 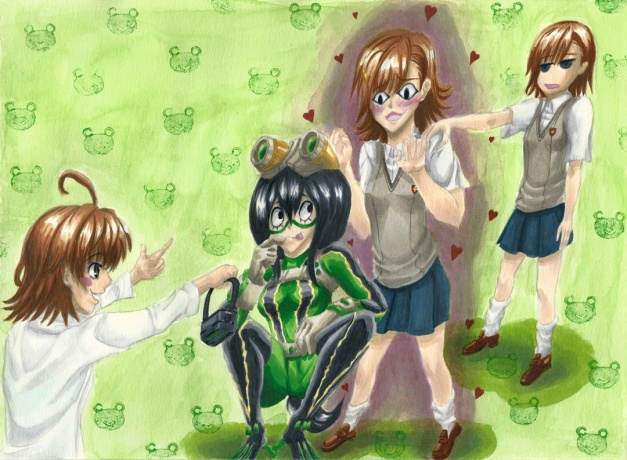 In any case along with that idea I wanted to have Last Order the smallest Misaka and Misaka 9982 (the most cheeky of all the Misaka sisters). I remembered Last Order having those goggles so I quickly came up with the scenario where she would have like to make a trade for Tsuyu’s goggles which look quite interesting and of course Misaka 9982 being the voice of reason when it comes to Misaka Mikoto’s obsession with anything Gekota. I also really loved the annoyed facial expression she makes so I really wanted to recreate it.

Now as for Misaka Mikoto I really wanted to capture this catlike expression she makes whenever her curiosity and infatuation comes into play. And of course not wanting to make the drawing too simplistic I also wanted to add some creepy/cute love aura around Misaka. I also thought making Tsuyu look a bit more worried would be a good idea, but I remember that she rarely changed her expression and going back through the manga I was right so I decided to keep this simple expression.

The drawing looking a bit too lonely on the left side I decided to add a speech bubble that emphasizes her worry about the situation. What do you guys think it says? (Hopefully I spelled it right) 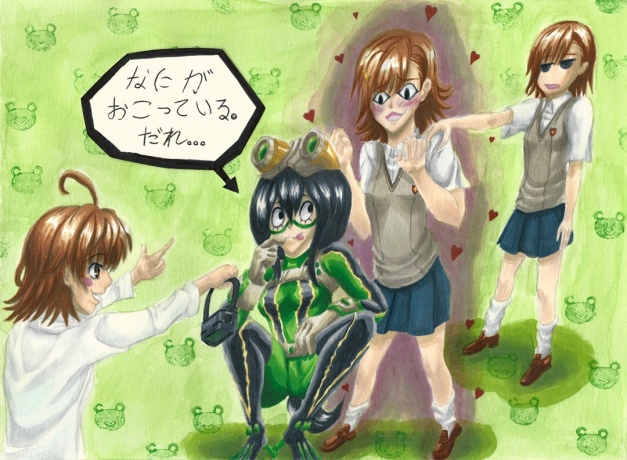 Before I forget I should also give it a title. The title will be: “Misaka Mikoto’s PARADISE and Tsuyu Asui’s Confusion”

It will be up as a print in the gallery.

And that concludes this piece. What do you guys think?