This line art was originally drawn for inktober 2021 day 25.
It can be seen here:

There were a couple of things I wanted to fix first before paint it. Mainly it had to do with Misaka’s feet and posture. Misaka just looked awkward so I redrew her legs. Next I moved to her arms to give her a more interesting pose. I also wanted to have her tilting her head in a different way to give her a more confident posture. Aside from Misaka, I also made a few tweaks to Misaki and Mitsuko.

Shokuhou Misaki after a workout

As we learned from chapter 5.5 of Astral Buddy, Misaki exercises (or at least tries to) in her apartment. Alone. For this reason I chose this setting. Just using the basic layout in the manga I decided to go with the point of view of looking towards the window. Although it was a cool idea, I wasn’t really thinking about the window at all.

So as I was painting the floor, and the wall I was feeling really good because I was doing it with no references and just instinct. But when I came to the window it finally hit me. The window has to have a reflection… For that I did have to see references to try and learn how I can make it work. So for that I started working in sections, painting over each section at a time. The base layer was just blue, then I started working with the reflections. I started with the floor then the bed which would be in front of Misaki. The second part was reflecting the rooms walls. For that I used the wall’s colors but mixing them with the blue base to get a translucence look. From there I played with lighter light transfer to emphasize the furthest part of the room to a more solid color of the wall to showcase how close the ceiling is to the window. Looking at the references online, the lights outside (in cityscapes) are quite vibrant and go through the reflections. Looking through the To Aru anime, the window lights (from the skyscrapers) are usually turquoise. The final part of the window reflections were about Misaki Shokuhou, but first I had to paint her.

I didn’t have much of a plan to paint Misaki, so I started painting her exposed body first. Whit the vase idea done, I started working on the sweat beads. Luckily I had an idea of how it looks like on surfaces thanks to the painting I did of Momochi.

That can be seen here:

The second section I painted were the shorts, luckily this was pretty straight forward. I decided to work on the shirt next because I wanted to figure out how to do it. I started with a base light warm gray and started playing around with lighter areas (the folds and shirt bumps), then for the areas that are tight on the body, I made see through to simulate the sweat. In these areas I played with the way light reflects off the wet shirt and the areas that are in the shade.

For the third section I painted the hair. With Misaki mainly painted, I started playing around with the painting and added more sweat around the body.

This time I wanted to try out making the line art more translucent (I think I put it at around 30% opacity) and adding an outline in a layer underneath with colors that correspond to each part of Misaki. I’m going to be playing around with this style more.

This one took a while, and it’s still not done. I remembered that in Pokemon there were three legendry’s that possesed the power of wind and thunder and a third one. I had done a bit of research at the time and learned that they were based on three Japanese Kami. Over the years I wanted to make a piece with Misaka and Kongo Mitsuko as Raijin and Fujin. After thinking a bit about Inari and learning that it’s the god of foxes, fertility and a bunch of other things plus it’s the leader of the three Kami I felt that Misaki Shokuhou would best fit this role. For various reasons. This drawing took a while since I couldn’t find readily available information about these three Kami and high resolution images of them. Then, the ones that were available came in so many variations that in the end I just decided to take some artistic liberty for some of the details.

For day 11 I drew Misaki Shokuhou. I remembered the extra chapter (5.5) where we see her exercising which I found to be extremely cute that she would only do that in secret.

This is an edited version of the battle between Touma and Gunha vs Misaka who has been used for the level 6 shift project. I made the colors a bit darker and more vibrant. I also re painted a couple of areas to add more details, lighting, shadows and changing a couple of details.

Today I accidently matched with the prompt for today, I didn’t even notice it till I was about to upload it.
Anyway, these past few weeks Saki has been posting videos of her practicing with her Kendama. Meanwhile in To Aru Kagaku no Railgun they finally covered the Indian Poker arc (this season was amazing, kind of a shame that they sort of messed up Index though). I wanted to have them do perhaps some more dynamic moves but I think one where they match each other and are both just chilling and enjoying their Kendama. Time is a bit limited till I finish those three essays so I will have to leave this piece in it’s line art state for now. I’ve been wanting to actually do some more drawings of both Saki and Saten so this was a good excuse to finally do it. More drawings of Misaka’s wingman and Captain will come in the future of course.

I’m currently watching the To Aru Kagaku no Railgun T anime. I’m really pleased with it. Unlike with To Aru majutsu season 3, they didn’t rush the series and the animation looks really beautiful. There were a couple of shots that used cgi that were moving a bit too fast and weird at the beginning but it seems they got used to it in the later episodes.

I really like Sogiita Gunha’s character so seeing him fight right next to Touma is amazing. Because this is one of my favourite scenes I decided to paint it.

Surprisingly this piece only took me three days to do. I guess I have been improving… 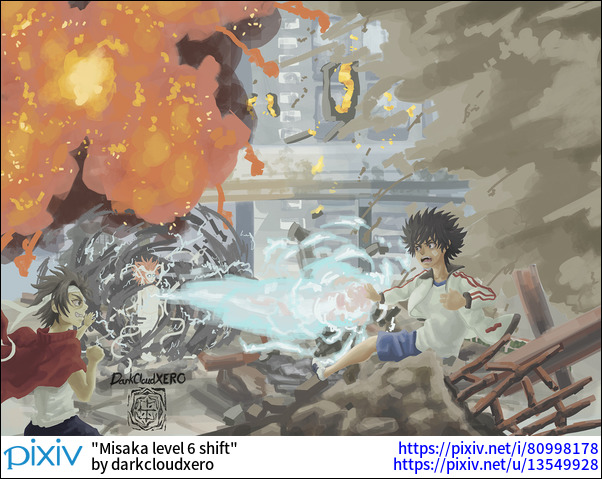 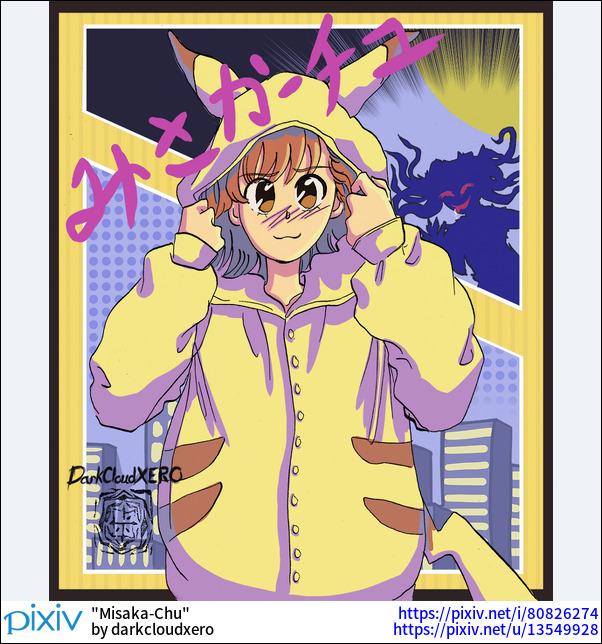