Today’s prompt is “Clock”. I had vary vague ideas of what I could draw but then I remembered Cardcaptor Sakura. Then I remembered there was the time card episode (#12 for those interested). And sure enough it fit quite well. I was making up everything as I went along and looking at the references I screen-grabbed from the episode. Personally I liked the way it turned out, I wan’t to come back to it and take more time on it and try to color it.

Man, that angle makes it seem like I am in the sky. It’s amazing how such a simple tilt can make a big difference. It might be a good idea to try and remake other anime scenes so I can study their impacts and effects. 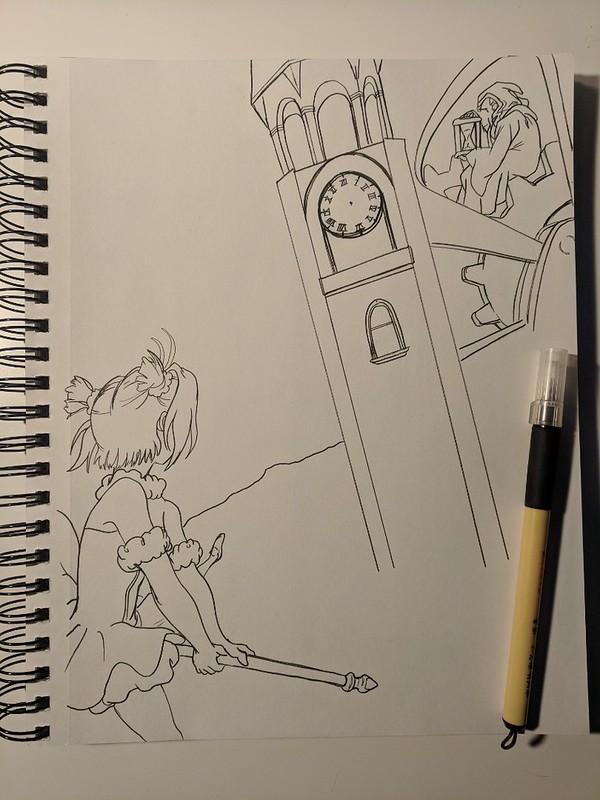 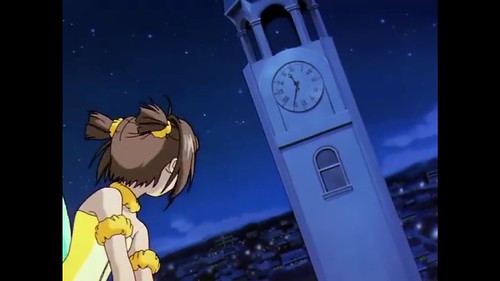 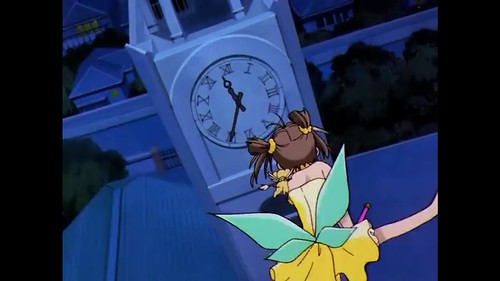 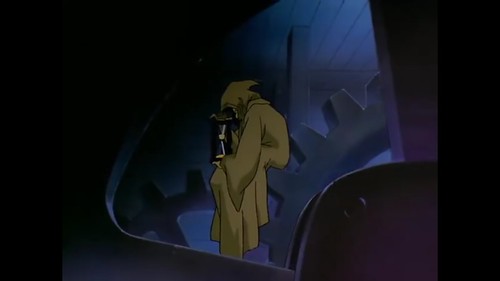 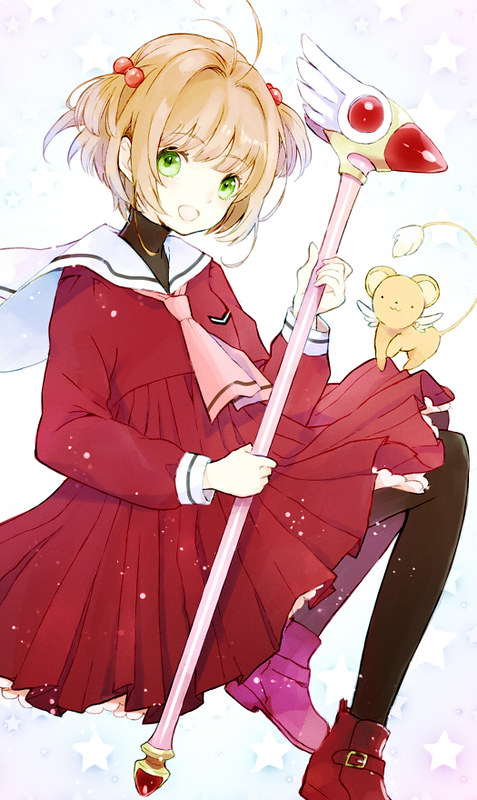 Now for the process:

If you actually read these and scroll through them you will see something a bit extra.

I was actually starting with my g pen but I made the mistake of once again trying out the Sakura Koi ink markers. And I just don’t really like the way they work or how they have color. Personally I would have preferred if they were more neutral with no color other than the grayscale. In any case because of that I drew it twice. 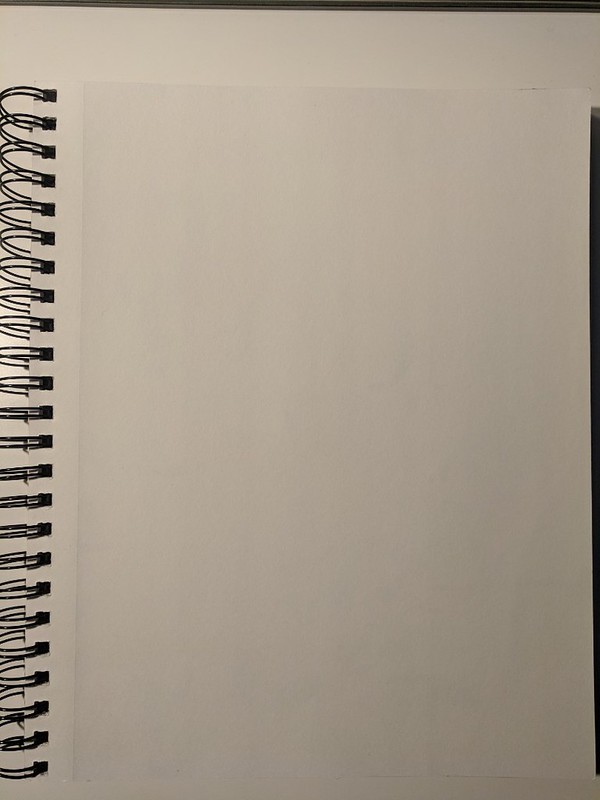 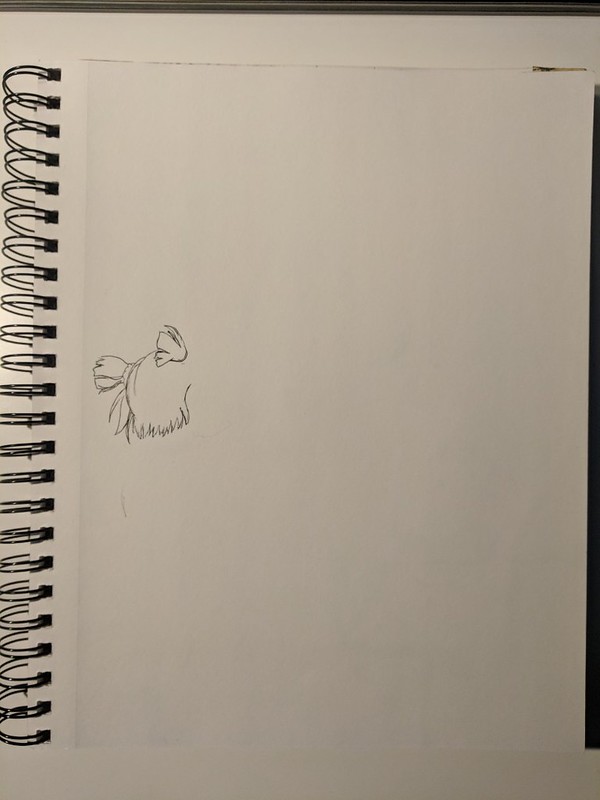 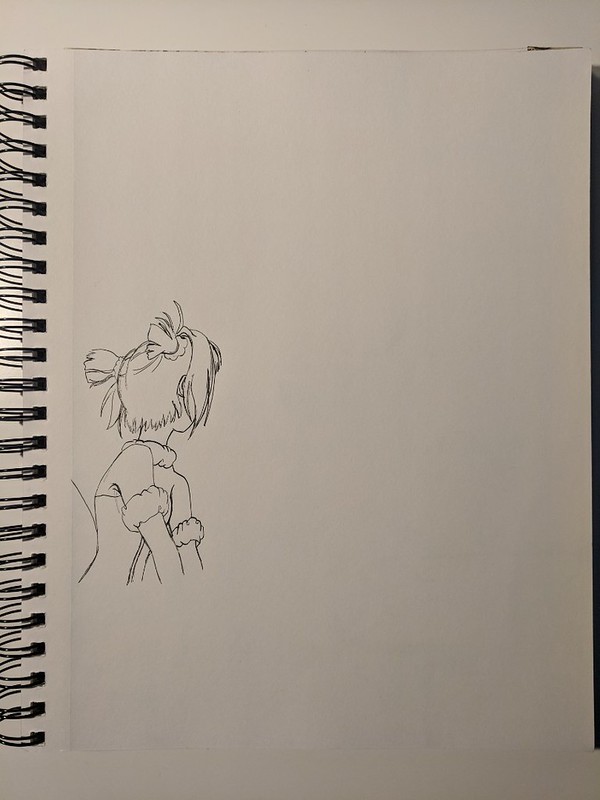 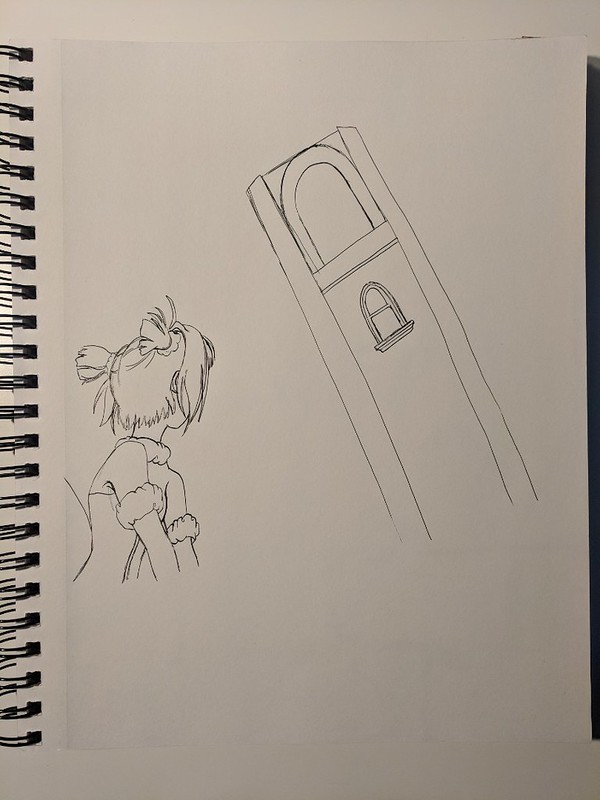 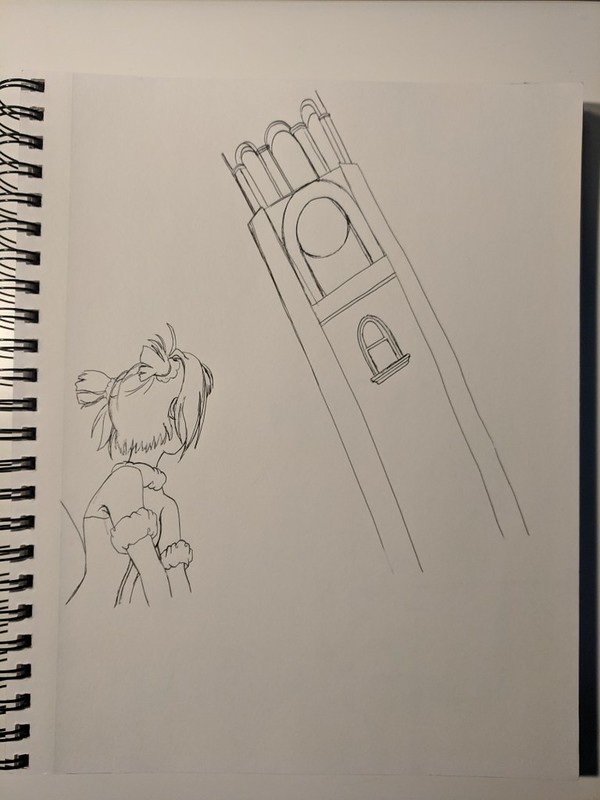 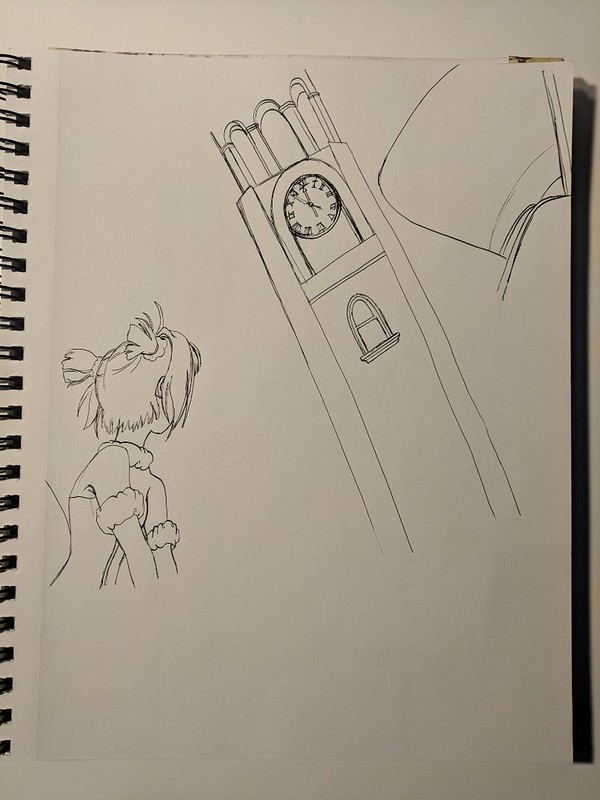 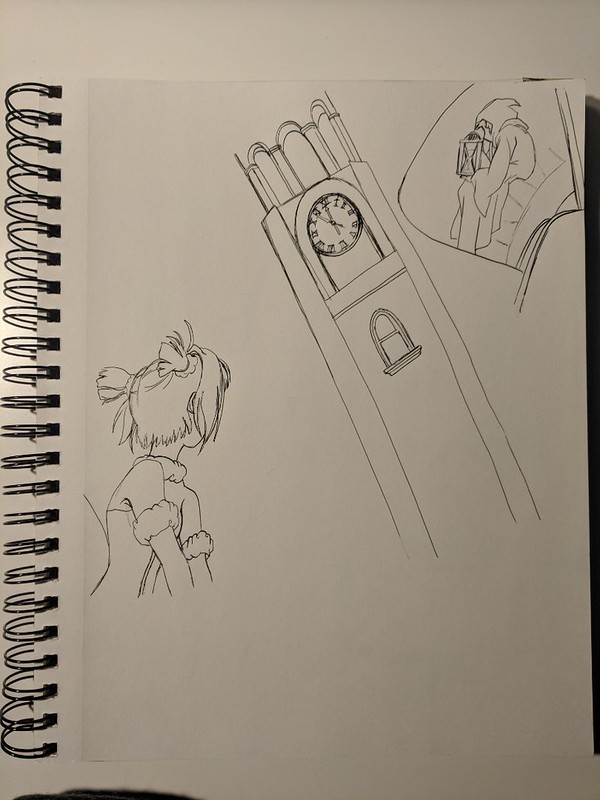 And there you go, I made another dumb mistake… 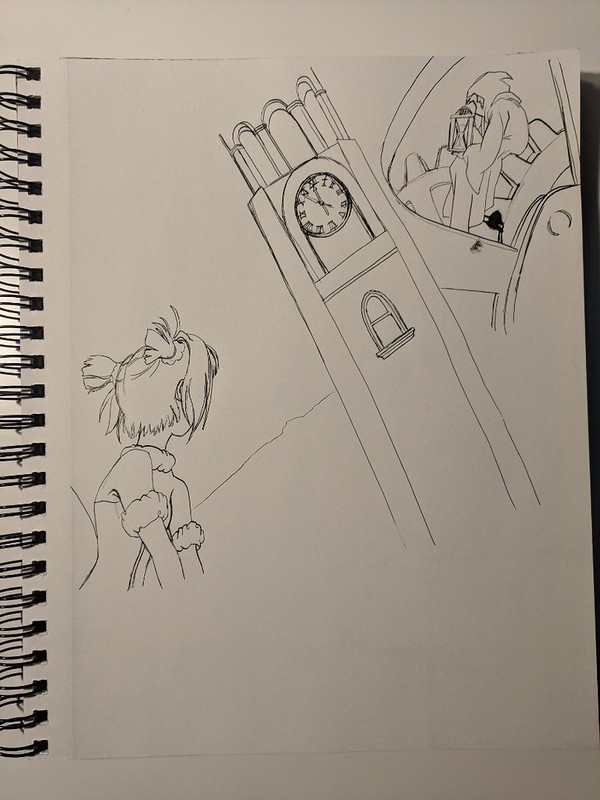 Was actually planning on only working with the top part of Sakura, but decided to go ahead and create the bottom portion of Sakura’s body. Surprisingly it went rather smooth. 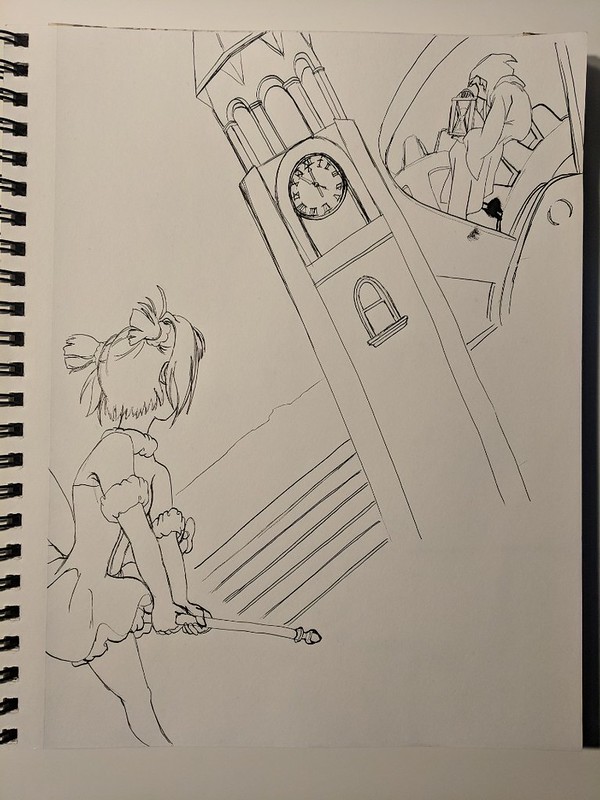 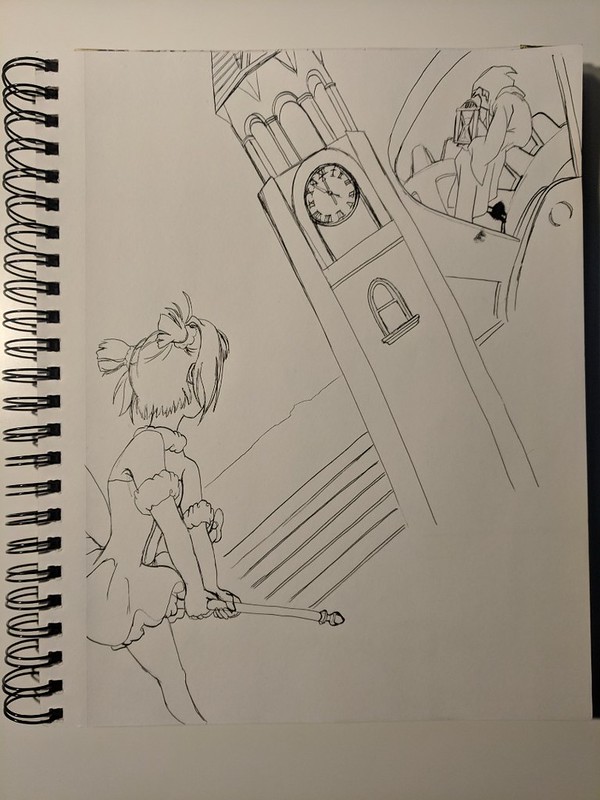 Then comes the Koi pens. 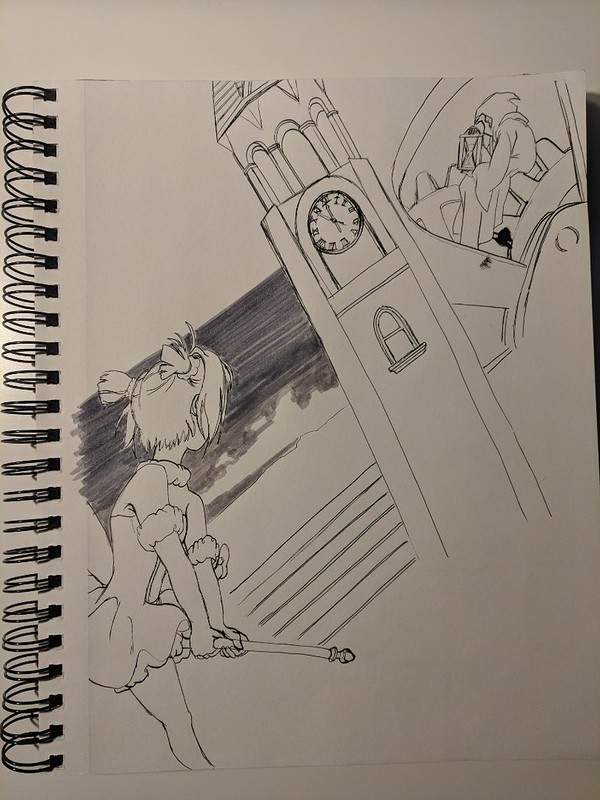 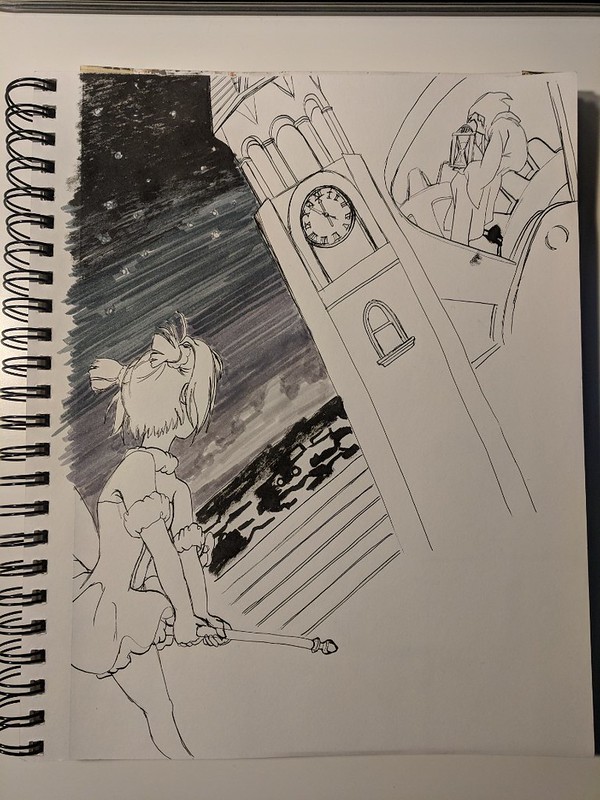 It doesn’t look horrible. In fact it has a rather interesting appeal but would rather just use black, white and everything in between. 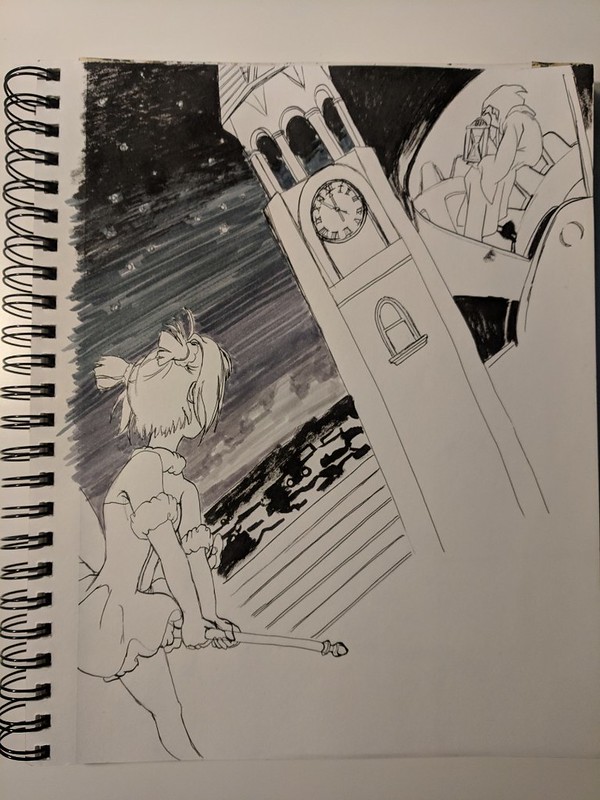 And here is the second try. This time I only used a “normal” pen, which made me draw much faster. Lines were all consistent so I knew what I would get, plus since it dried instantly I don’t have to worry about smudging the ink so no wait time to move from one end of the paper to the other.: 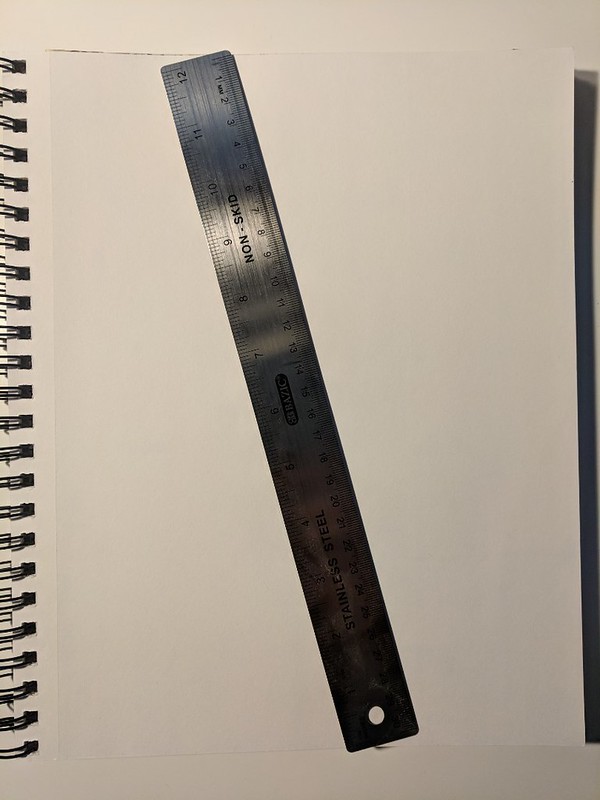 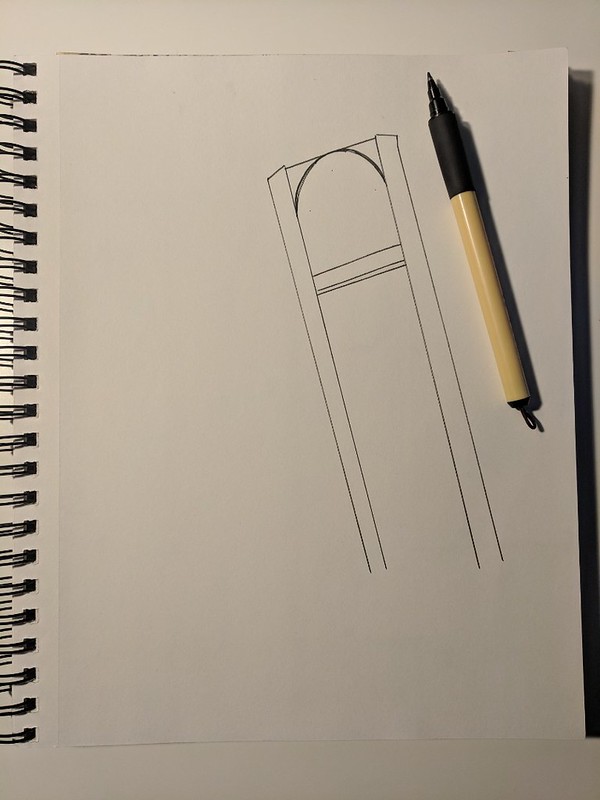 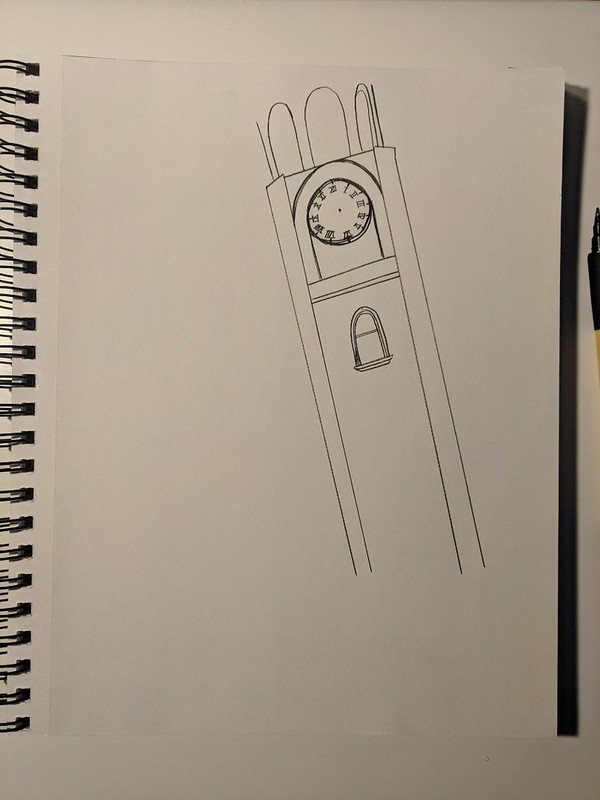 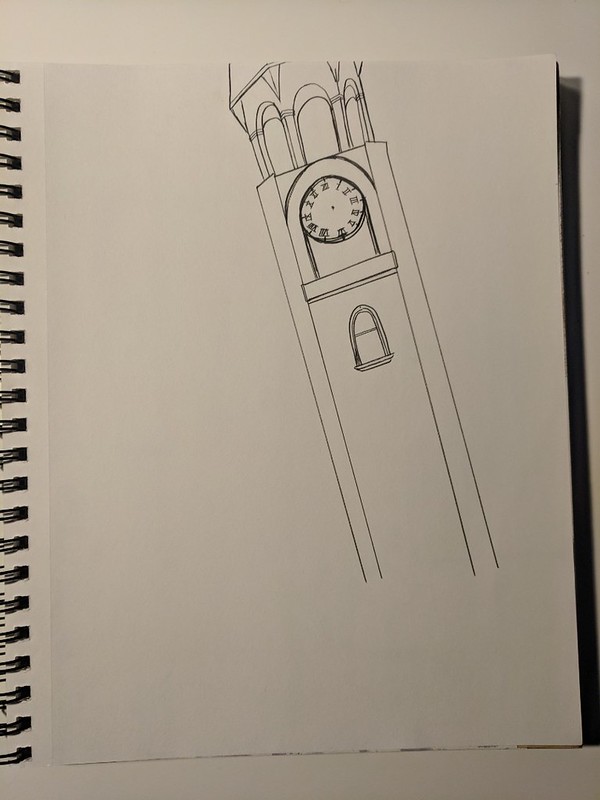 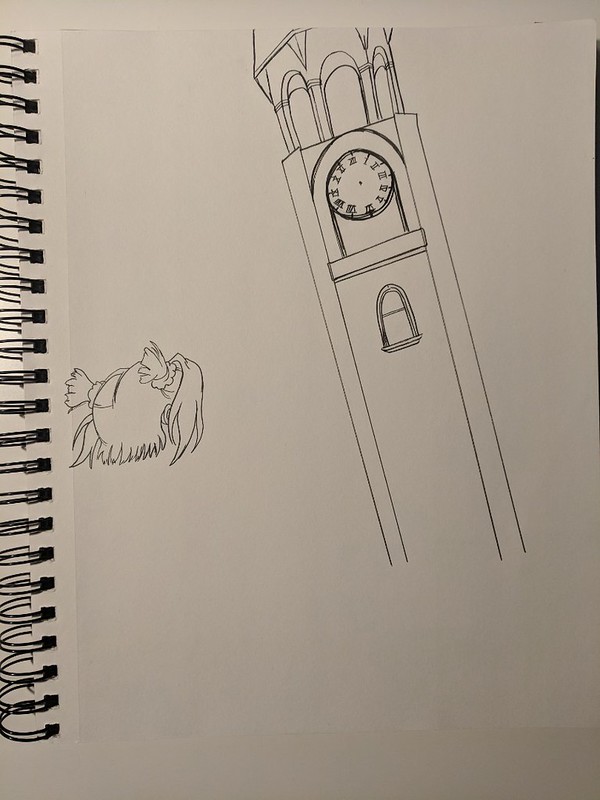 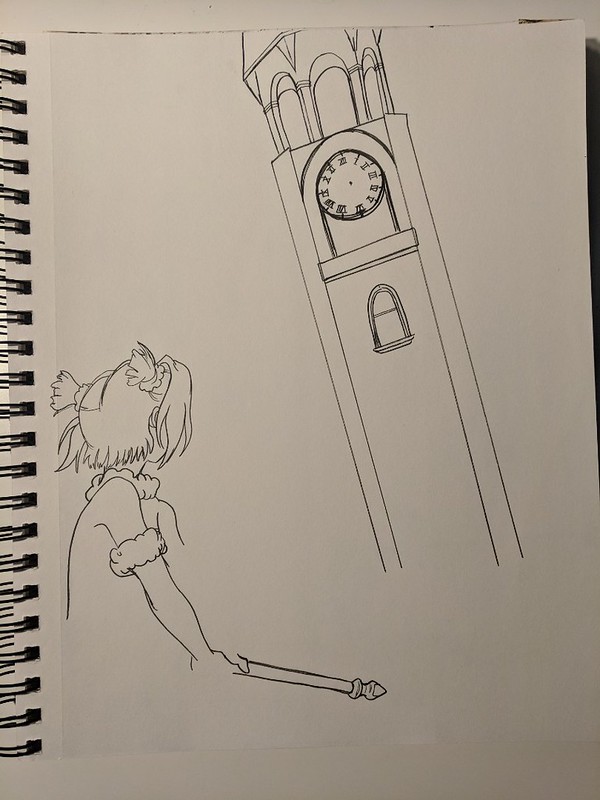 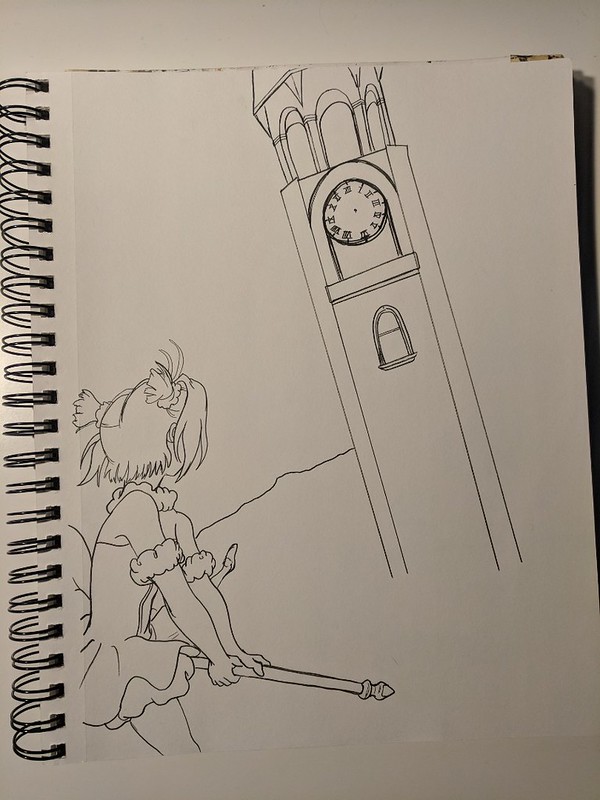 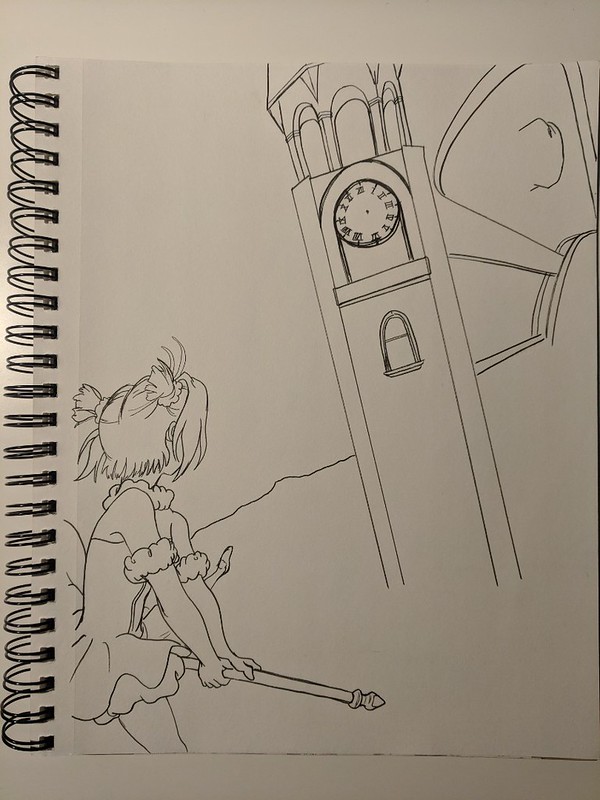 Couldn’t figure out how to ink it in a time efficient way. I already drew this piece twice and I have more work to do so this line work will do for now.

Here is another go at coloring digitally. For this one I will be doing a much more simple drawing with no background. I wanted to use only about two different varieties of the same color to see how simple coloring would look on a drawing. This drawing is again of Cardcaptor Sakura and also from 2006. I know this is a reproduction, but I don’t know where I got the reference from. Most likely it is from one of the volumes of the manga, the things is I just don’t know which volume… So I apologize I can’t show you the original this time.

In any case here is the scanned drawing:

It’s a bit rough, but it will do. It is a very simple drawing that I can just apply color to it.

So for this drawing I tried to use some of my traditional techniques. On top of that I used some the few digital techniques I picked up so far.Not looking too closely, it almost looks like if I colored it using Copics. And that makes me ecstatic. Of course this is still a bit new to me, and I have much more to learn. The road seems to be a long one, but I really hope I can grow exponentially as I go along.

Here’s working towards the best!

A few days ago I said that I was working on a new technique where I digitally colored an old drawing that I had archived and scanned. From there I plugged it into Photoshop and after converting it to a layer and setting it on multiply I placed every other color layer below the scanned picture. What is amazing about doing this is that I get to keep every single detail that I placed on that drawing once I color it in. This is great because I really suck at drawing on the tablet. I prefer traditional. I’ve gotten to the point that I can draw traditionally very good at a really good pace, but when it comes to adding color… I am still learning and that is where most of my time now goes. And since it takes so long, I don’t have time to practice digital art. Doing this will be the best of both worlds! (If you have been reading the past posts you may be wondering why I keep repeating all this. The reason is simple. I am super exited that I can do this and am really looking forward to when I get to master this technique.)

For the first piece I will use to try out this new technique (at least to me anyway), I will give the honor to a drawing of Sakura Kinomoto from Cardcaptor Sakura (one of my all time favourite animes, and a fond childhood memory). This was done at a time when I was still learning how to draw by mimicking my favorite artist (almost all my old drawings are reproductions of one thing or another). This is a drawing I tried to recreate from one of Cardcaptor Sakura artbooks.

This is the piece I’m talking about:

I still couldn’t let go of a lot of my habits from traditional drawing… I will have to try and develop some new ones. The best way is to learn from others that have already learned how use the digital medium, and luckily there is  alot of artists making Youtube videos showcasing their artwork and techniques so really it is just a matter of looking for it.

Anyway, here is the drawing I did when I was around 14 or 15 years old.

Now as to why the drawing is inverted is any ones guess (no seriously I really don’t know why, maybe the copy of the artbook I got was inverted because it was Japanese and  they decided to have it open like western books here in the States… thinking about it, that might not be far off.)

Now as for the first piece to go through my fledgling digital abilities, here it is. I will admit, it isn’t the best coloring job ever but I did the best I could with my current digital art level.

It may not look like much to you, but for some reason this did take me quite a few hours to do. Aside from painting it over I was also messing around with my tablet and learning keyboard shortcuts along the way. I actually learned quite a lot from this piece and also configure my tablet’s buttons to do all the shortcuts that I felt I would need the most to move in the most productive way possible. The original scanned drawing doesn’t have much detail or shading so I do wonder what kind of effect it would have on it when I add even the most simple of coloring techniques?

Well this was a quick update on the beginning of my quest to mastering the elusive Digital Artwork!