This was drawn using a reference from the show Shoujo Commando IZUMI. Recently I watch this channel named Kenny Luderdale who showcases old school anime and Japanese shows. On one of the episodes he was talking about this show which at the beginning was going to be a Sukeban Deka sequel but changed into a mix of a lot of 80s action movies.
His video is here: https://www.youtube.com/watch?v=Q0GmMbH-1hc

I was thinking of doing my take on this one photo that apparently some people were thinking was of a schoolgirl Vietcong: https://pbs.twimg.com/media/CO1J7nAUAAAQxSw.jpg

What’s funny is that when I was plugging it into the Google image finder it marked it as a photo of Fusako Shigenobu, leader of the Japanese Red Army.

I took some screenshots of some other cool scenes but I will same that for some other time.

While I was drawing it with ink I began to wonder whether what she had even had rockets. I began to remember that Kenny referred to her weapon as a bazooka. Luckily when I searched information about the bazooka, I learned that it was indeed a type of rocket launcher so I was still okay. Didn’t get a chance to ink or hatch it but I should probably try and do so for some more pieces in the coming days.

This is a colored version of the Inktober drawing I did on the 22nd day of 2019. I used the reference picture for the background and colors. I found it easier to simplify the colors. I guess that comes with experience huh. I was going to start painting it with Photoshop but the paint effects from Corel Painter are more my style. I really like the way they blend and react to one another. 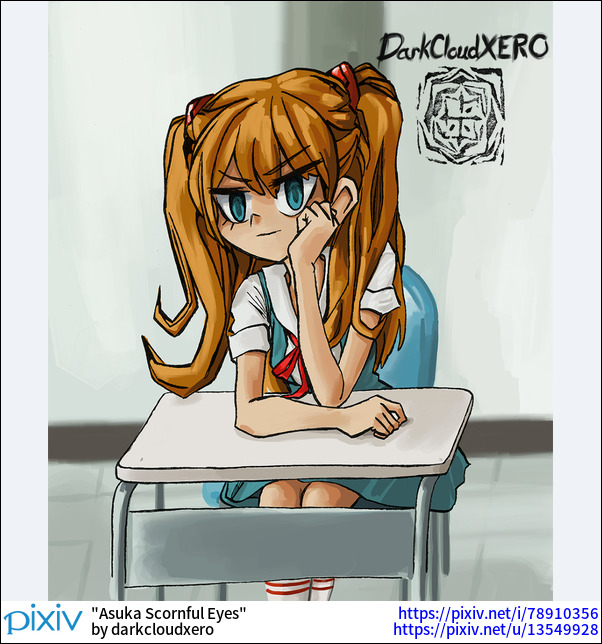 Today’s Pixiv theme is “scornful eyes” so I chose Asuka from Evangelion who has some of the best ones. 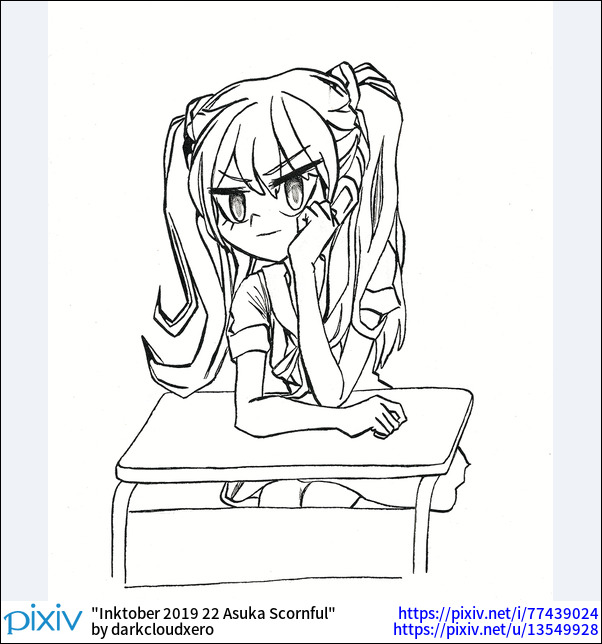 This is the final piece all finally composited together. Making the background sure did take a while. It was all done using Copics. Copics are great but they do have their limitations and require quite a bit of steps in order to have them work the way I want them to. And since covering large areas takes a lot of ink it can be quite an expensive medium. But I wanted to see if I could get a handle on colors and values using nothing but the Copics.

I had to think a good bit about what I wanted the background to be but since I was going for a yanki theme I figured having them in the arcade setting would fit well. I was considering having Athena carrying a bat but decided against that for this one (maybe on another piece sometime in the future). Once I did finish the background I did have to calibrate the colors digitally and also clean up some of the forground objects so that I could place Athena and Miss X behind them. Once I did do that I went ahead and fixed their values so that they fit in with the background and then also added some shadows.

I’m really surprised that this drawing took me so long to draw, but I guess it is expected since I decided to add some background this time around. The time accumulated for this drawing was … 19 hours and 10 minutes. In a way I find that astonishing, but believable since I was making up techniques as I drew. I’m surprised I didn’t get stuck and end up ruining the drawing. One thing I have learned though is that adding various colors to a certain object or objects will make it more believable and realistic so I made sure to go in with that type of mentality.

I’m sure many fans of the To Aru Majutsu no Index and To Aru Kagaku no Railgun know that a new series is being aired at this moment, it seems to be focusing on Misaka and her involvement with her sisters/clones. And I have to say, it is absolutely amazing. Both the story and the animation. I seriously wish more anime’s put in that much effort at least into the animation. In any case, this drawing is inspired by the fight between Misaka and Mugino Shizuri ( no. 4 as the strongest level 5, known as the “Meltdowner”). Their confrontation ended last week and it was awesome, plus it also left it open for some more “encounters of the level 5 kind” (yeah… I know, stupid joke).

Throughout the drawing I really did not know what I wanted to do yet. I just had a goal to draw her in a pose I haven’t seen before. So I just made things up as I went along. As I was drawing I decided to have her injured but still willing to fight, and I also liked the idea of having her fight outside (meaning I would have to draw a background as well). One thing I did want to include was her shorts. Usually I don’t like upskirts in anime/manga but because she always has shorts I find her to be a really awesome character that doesn’t feel the need to flash in order to be popular. I seriously feel that more female characters need to be like that. Plus her shorts are pretty much her trademark (well that and electricity, gekota, etc.). I did feel kind of bad making her bleed, but I feel that makes her look more vulnerable and human like. As well as making the situation look dire. If anything I feel the drawing only needs a bit of rubbing/blending in order to make it smoother (mostly in the sky).
What do you guys think?
Any Questions/Comments?