I finally got the chance to see Demon Slayer about a month, a month and a half ago. On episode 10 Nezuko had a battle with a Kemari. It very quickly started to resemble Captain Tsubasa. There was even a scene where she was charging up a kick and it looked just like when Kojiro shoots his Tiger Shot. Drawn using a maru pen. At first I was going to have Kojiro in his Soccer uniform, but I felt his training outfit would look more flashy. Specially if it was open and flapping with the movement. Captain Tsubasa 2018 is over… Hopefully they will continue animating the rest of the story, it would be a shame if they stopped here. The fight between Hyuga and Tsubasa was really entertaining and really pumped me up as I watched it in the gym. When they revealed Hyuga’s Tiger shot I got goosebumps. They did a really good job to show the power and strength behind Hyuga’s shot. No question about it, Hyuga is definitely my favorite character of Captain Tsubasa.

I really like the aesthetic of giving the idea of power and movement by using hatching and rough lines, it really blends well together with color. 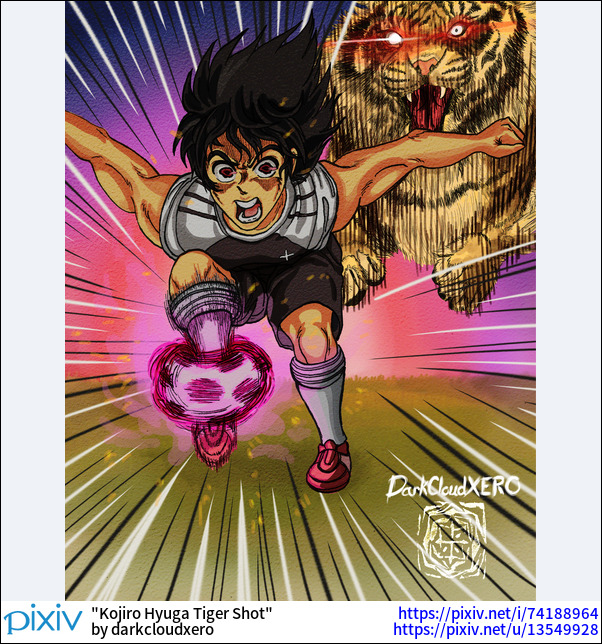 Digital (Coloring) Process (I used Krita first and then Photoshop):

What I like about Matsuyama is that he truly is the counter character to Hyuga. While Hyuga started as a force all on his own, Matsuyama was a complete team player. On top of that they influenced each other quite a bit as the story progressed which allowed Hyuga to build up his team play and for Matsuyama to develop his individual play (which allowed him to go against ace players). But despite this, it’s obvious that Matsuyama just doesn’t have the heart to be cold blooded enough to win at any cost. I really liked the way he had to remind himself to be a bit rougher and not worry about Tsubasa’s injuries in the middle school arc. Yet despite this he still put his own body in the line so that Tsubasa wouldn’t injure his shoulder further. Truly a man among man.

I tried to start tapering off the details as I went further back with the background but I feel it would have been much easier doing it with water colors. I want to make a piece where I combine both. Copics are cool but one is limited by the colors one owns, and they are freakin expensive. … I wonder if I should have added a bit more color to the crowd, but I also didn’t want to add too much detail as well as muddy it up. I did learn a good bit after this piece so I will try it out on the next one.

Of course this piece is based on one of the most recent episodes:

They will finally cover Hyuga vs Tsubasa in the coming episodes. Can’t wait!

This if for those of you who read these posts, I was actually working on a new piece for the day after Valentines day but some things happened and I had no choice but to postpone it. Here is a preview (will release it next year, probably):