Sorry I haven’t really posted anything new since RE: Utada Hikaru. I was actually supposed to post this yesterday but I was able to make a lot of changes because I didn’t so it all worked out. This will be a little different from last time so here we go.

This is where we left off.

Because I was doing it as fast as possible I made quite a couple of mistakes and left out a lot of detail which downgraded the finished piece quite a bit.

Now here are a couple of stages where I began to make changes to make it more refined. 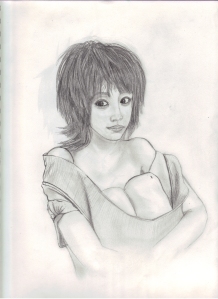 First off I began by making the shadows a bit darker and fixing the eyes (which were way off). Another very important detail I had to change was the face, which  I had to elongate from the right side.

Later I began to play around with the tones, making some areas darker and others lighter to make it a bit more realistic.

I kept doing this a couple of times.

Once I got the face with the right tone I wanted I began to lighten the hair with my eraser, kind of like drawing with white lines.

I redid things over and over until I got the desired feel, both in the face and in the hair and body.

When all the main things were done, I began to pay special attention to the small details, that even if one doesn’t expect them to, they actually help give the drawing an amazing finish. I darkened the hair in the light areas, and gave shadows in other parts of the body to give it a more three-demensional feel. I also gave a bit of more shadow to the lips which was very important. And so this is the final stage. So let me know what you think?