This is a double feature of sorts. I will be doing two types of painting on this drawing of Goku which has been drawn with ink. I first used watercolors to paint Goku and then I painted him again digitally using Corel Painter 2020. The time between each was very noticeable. The traditional painting took and the digital painting took me only . I really have to think about how I advance after every movement. Meanwhile with digital painting, I seem to have more experience and I can make as many mistakes as I want since I can undo right away. But I guess that doesn’t completely transfer over to traditional. Although I can go as detailed as I want, it might be better if I develop a simpler style like Little Thunders which can be so versatile but not overworked.

This painting has made it clear that I should practice more with watercolors. One other thing I remembered, don’t ink your drawing if you will be using watercolors on it (this is only if the inks aren’t waterproof). Otherwise they will smudge when painting. Instead, go over the lines by pressing hard on them using a pencil (I mean I know this, I don’t know why I didn’t remember). Then erase everything. If done correctly, the lines will be visible even when painting over them. One you are done painting, the line art process can finally be done. This can be done with ink, color pencils or more watercolors.

Since were are past half way through this month, we are closer to Halloween now. I’ve been re-watching “My Youth Romantic Comedy Is Wrong, As I Expected”. I never got to finish it when it came out. So hopefully this time I actually get to finish it. I’m really enjoying it (currently in season 2). In season 1 episode 8, Yui and Yukino both dressed in cosplay. The costumes used are what I used for reference in this drawing.

I really wanted to draw Goku in his snow outfit from the muscle tower arc. When I was getting reference pictures from the anime I noticed the Suno seemed to have a crush on Goku. Later when I compared the same arc in the manga, the whole subplot was completely absent. In any case I decided to make a piece of Goku and Suno. I wanted to make it seem like it was a scene from the anime. I wasn’t too sure how I would pose Goku and Suno so I first started by painting the background. I really like the way it came out. After that I decided on having Suno looking at Goku as they built a snowman. Lastly I decided to add some snowflakes. 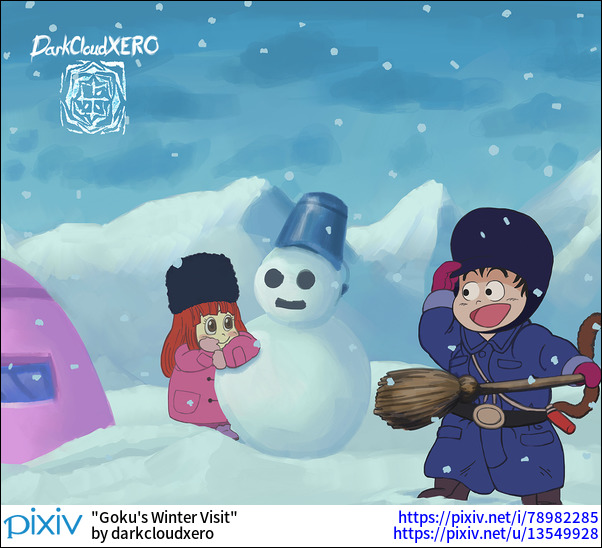 Luffy vs. Natsu while Naruto observes

So here we have another drawing for another contest that popped up. I want to say thanks to LittleBabyDollxx for giving me the info otherwise i wouldn’t even have known about it.

The theme revolved around the usage of three characters each from one of these series; One Piece (definitely one of my all time favorites), Fairy Tail (Hiro Mashima has not disappointed me yet, I became a fan from his last work Rave Master), and Naruto.

I decided to make it revolve as a battle, but because I only really know about Luffy and Natsu (I did not really get into Naruto when I read a couple of volumes, maybe I’ll give it another chance sometime in the future) I put Naruto as kind of filler. The back story goes something like this; Luffy and Natsu want to find out who is strongest and prove themselves to their respective comrades and the world, while Naruto fought some strong foe (I’ll let you guys use your knowledge and imagination to come up with someone) and won, but still got battle scarred. As he lay on the beach he was to witness an amazing battle by two of the worlds strongest warriors.

Personally I think the drawing looks much better without a background. Reason being that I felt I rushed the beach a bit too much and thus sacrificed a lot of the details. I don’t feel it looks too bad, but it does not meld well with the three figures. I would have to add some color to the lighting that touch Luffy, Natsu and Naruto so that they looked natural. But seeing as I only had one day to work on it, and if I added such details I would lose time and maybe not get the chance to turn something in. Although incomplete this piece should be sufficient (or so I hope).

This is my second drawing of Erza Scarlet, (you can see my first one here, http://www.youtube.com/watch?v=IojQKf-ulWk ) this was  a request I was asked for a couple of months ago but seemed to have not taken not of it. So I apologize for not doing it sooner. I wanted to try something a bit different so I decided to finish it off with a pen using only hatching and cross hatching. There is definitely a lot of room for improvement but I think I should be able to fix it. Overall though I don’t think it looks too bad.

I am happy to announce that for todays video we will be drawing, Erza Scarlet from Fairy Tail a series that I truly enjoy reading. Erza definitely has what I look for in a women; strong, smart, brave, nice and not afraid to kick ass. Not to mention her amazing looks and proportions. One of my favorite things about her abilities are the forms she takes and the control of the swords (remind me alot of Kingdom Hearts, my all time favorite game series). I think that favorite form definitely has to be the “Heaven’s Wheel Armor”, in fact I was really tempted to draw her in that form. But I just couln’t help but fall for her in a maid costume. Which is how I drew her.

After looking for some references I noticed the anime version and renditions from fans when it came to the colors and designs were a bit different. But I liked the manga design since it had more details and I liked the coloring a fan did on one of Hiro Mashima’s drawings from the manga. I felt that the red in the skirt really brought the image out more than using more black or dark colors.

It’s kind of sad but you can’t really see all the quality of the drawing through the camera’s lens, it really looks much better when you look at it in person. Hopefully when I scan it, the image will showcase its true beauty (I’ll be posting some more of the drawings that I have drawn so far on my page).