This was originally drawn in September 28, 2018. I also painted it beforehand on October 1st, 2018 (seen here, quite embarrassing looking at it now).

I didn’t quite like the way I painted it the last time. So on April 29, 2019 after practicing with color and painting I decided to give it another try. At that point I stumbled upon the works of Takato Yamamoto. I fell in love with his work and use of simple colors to create amazing pieces. That’s when I decided to try and paint Booette in a simple color scheme with a minimal amount of colors. Although the styles are no where near the same and I was still learning about how colors interact with each other, I really liked the way it turned out. I wanted to add more color to it, but I stopped my self as best I could. Now that I feel more confident with color I wonder how it would turn out? 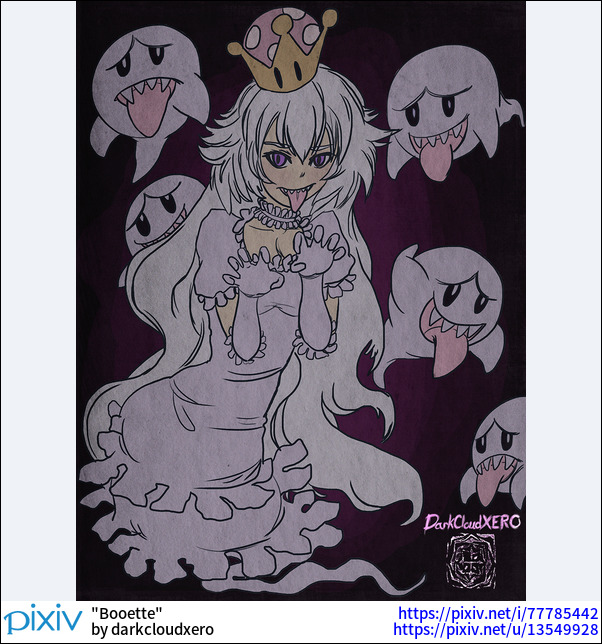 I’m finally back. It took a while to get some other duties done, but that doesn’t mean I wasn’t working on the next artwork. I just couldn’t put any time to come over here and write a bit of an update. But as promised here is another update.

About a week ago I showed you guys an unfinished artwork, well here it is. It will be going into the gallery so that it can be purchased.

I will add the description later.

How to Draw Challenge – Aqua (After the Battle) (COLOR)

I disappeared once again, and I apologize for it. But I am now close to being finished with my newest project, so I hope you guys look forward to that.

And so the time has finally arrived for me to draw Aqua from Kingdom Hearts. I have been realy looking forward to drawing her for such a long time. After playing Kingdom Hearts Birth By Sleep she definitely became my favourite out of the three new heroes. Her powers just like her personality were gentle and balanced, creating the strongest and most prominent character in this arc. Her involvement in this story was so great that without her the story might have ended at just that, having Xehanort winning the battle between light and darkness. I can’t wait to see her in Dream Drop Distance and witness what other feats she will accomplish.

As stated in the video I want to hear your comments on which version of the drawing you like more. The light drawing or the dark one?

I can’t believe that it has already been ten years since the appearence of the first Kingdom Hearts Game. It has been a long time but filled with great memories. Those times I spent playing the game were filled with a lot of happiness and dreams. Whenever I turned on my PS2 to play it my problems just seemed to fly away, to be replaced with the wonders and magic cast by Sora and the rest of the cast. I really owe alot to Kingdom Hearts, after all it has been a great part of my childhood and was also a great motivator in my current pursuits to become an artist that also creates a story to go with my pieces (I’ll talk about this project a bit more on another post).

Two days ago SQUARE ENIX just released a new trailer for the upcoming installment of Kingdom Hearts Dream Drop Distance or Kingdom Hearts 3d for short. Just like last time we get another long preview of what the game will look like, but most importantly will leak a bit of what the story will deal with on this new journey. The last trailer really surprised me, especially since we saw the addition of characters from The World Ends With You. But this, this just blew me away. We get to see alot of the characters that appeared throught the whole journey, finally being able to meld with one another. All the other games (kind of obvious I know) were leading up to Kingdom Hearts III, and Kingdom Hearts Dream Drop Distance is the glue. Althought it has been said that they are in a different dimension (which will probably mean it didn’t “really” happen, but will help open the truth to what happened since Xehanort desided to take over Kingdom Hearts as well why he probably delved into the darkness).

I do wonder though, if they are going to use Passion as the theme for the game as shown in the trailer? I really love the songs used up to now, but it would be nice to have Utada Hikaru create another masterpiece for the series. Although seeing how she is in hiatus I doubt it will happen for this installment. I am sure that she will definitely make one for Kingdom Hearts III which I am sure will be officially anounced pretty soon. I do like the fact that they keep Utada Hikaru as the main singer though, I am sure that SQUARE ENIX and a lot of fans see Kingdom Hearts and Utada Hikaru as a set. So to get another singer would probably not work as great as it has done so far.

Here is the trailer from the SQUARE ENIX page on youtube, enjoy and let me know what you think: