Momochi in the beach

Man, this one is already about a year old now. I was planning on releasing it at some point but it never happened and ultimately I decided to release it when it got hot out again. And seeing as the weather has been getting hot lately (plus I haven’t uploaded in a while) I figure now would be a good time to upload it. The painting of Momoko is the same that was done a year ago but wasn’t pleased with the background so I tried out my new pc upgrades with this piece by painting a new beach background. There is no more stuttering or slowing down anymore (although the temps of the CPU are a bit worrisome). I tried out some of the other brushes that Corel Painter offers and saw no problems at all. Last time I tried it with my old components my pc couldn’t keep up. Although it could handle my favorite oil brush it tended to close up (Corel) on me from time to time. The last time when I was painting the Buono piece I lost half an hour’s worth of work which really sucked. I was going to wait on upgrading for a bit longer but after that happened I decided to pull the trigger. And I’m very happy I did.

I really like Momochii’s Yurushite Nyan pose so I went with that when I first drew her. My thought process at the time was to try out 80s/90s style painting which can look extremely beautiful if done right. But as mentioned when I was looking at the old background it just wasn’t up to par so I made a new one that would fit Momoko.

I’m planning on making more paintings throughout the summer ( I actually have had some ideas floating around for a while now). But work and my decision to make a desk computer will be keeping me busy for a bit longer. Hopefully the extra space in the desk will help cool down my cpu and gpu if not I’m going to have to invest in a new cooler…

It has also been a while since I’ve done some traditional watercolor paintings so I hope to get back into that as well.

My brother told me about this redraw challenge for Sailor Moon. It seems that people are mainly focusing on on a certain screenshot. But I wanted to change it up a bit, which others have done as well. I would say that Rei is my favourite of the sailor members so I wanted to paint her. I really like the aesthetic of her in the pink overalls so I chose that scene. Background wasn’t too much of a problem but I painting Rei did take a good amount of time. Though since I wasn’t using other references as I painted her had me processing every step. 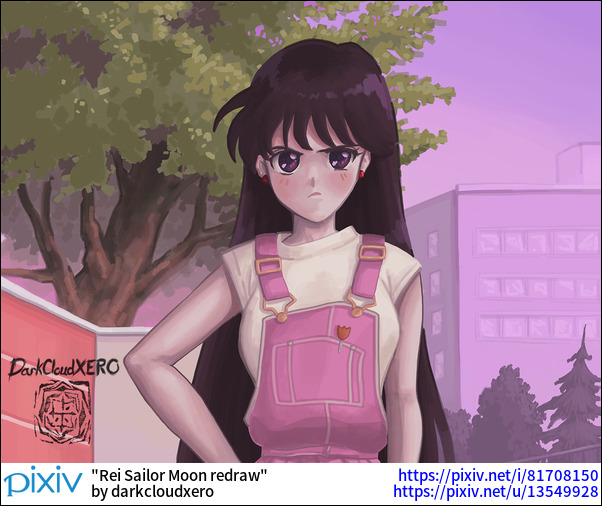