Youtube videos for the Lin Lin painting are now up

The painted version of the inked drawing I made a year ago.

I had two options that I could use to color, the line art or the inked version. In this case, I went for the inked version. Because of this, I decided to go for a more flat style. I decided to have a red background, so the colors were based off of that. While I was painting, I was reminded of a problem that this drawing had. Her right eye (which is on our left). It was misaligned and a bit too low, which I feel was exemplified more when I painted Lin Lin.

I just noticed, but this drawing was done almost a year ago. And it has been painted for almost a couple of weeks now. But I kept pushing it back. Maybe I should upload every day instead of only on weekdays. But I do plan on making videos on things beside the speed paints as well, so I’ll see how my schedule ends up looking before I make a decision.

I went for a flat colring style this time. Hmm… Metal Bat looks a bit like Dracula…

I’ve been doing a couple of paintings these last two days but I won’t be showcasing them till a couple of days later. In the meantime I decided to make a simple and quick drawing. At first I was of doing it completely with ink but ended up doing it with a combination of both. Although I’m sure I could have done a lot more interesting effects I wanted to emulate a smooth color coverage.

As for the reference picture I used, surprisingly I came up with the idea of drawing Metal Bat (one of my favorite S rank members) when I was looking through one of my 80s reference folders. I came upon an ad for the Be-Bop Highschool movie poster. If you look at of the actors named Tōru Nakamura, he looks a lot like Metal Bat. I seriously wouldn’t be surprised if he was based off of the actors image in the movie. Which you can look at here: https://cdn.shopify.com/s/files/1/2691/7222/products/12933_abd05aff-36ce-4d72-84be-65e945c0d7da_1024x1024.jpg?v=1584502254

I wanted to do another copic piece, but this time I wanted a more manga styled one with a more simplistic coloring scheme. I’ve been drawing a lot of girls lately so I wanted to draw a guy this time. For today’s subject I drew Suiryu again. I just barely had a chance to see the second season of One Punch Man. The animation is not bad, but it truly has degraded compared to the first season. I also noticed that they rushed some scenes quite a bit, but it’s not too bad (specially compared to what they did to To Aru Majutsu no Index III). It was really fun seeing Suiryu get animated, I just hoped to see more of him.

As for this piece, I wanted to have Suiryu actually training after the tournament incident but I still wanted a bit of humor. So for this drawing I used the pose of the Cat’s Claw from the Jackie Chan movie Snake in the Eagle’s Shadow. It’s a powerful but hilarious style. You can see it here. 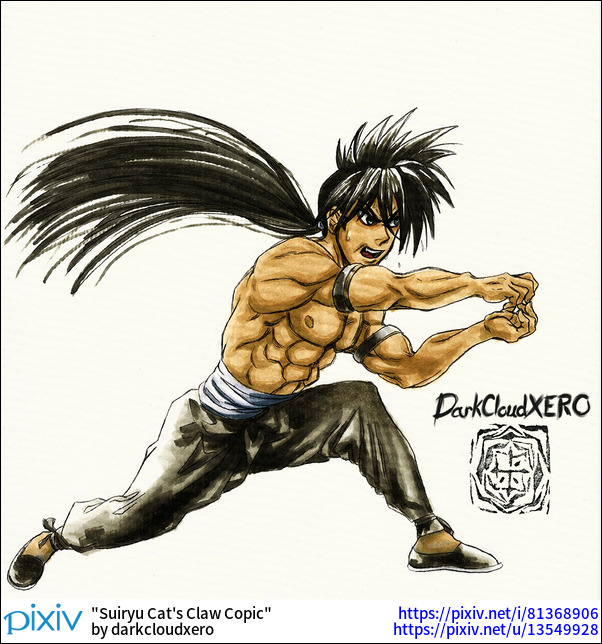 I’m amazed at just how much effort Yusuke Murata puts into both the characters created by ONE and the ones coming out (so far) in Murata’s version. One of the characters that really captured my eye is Ring Ring. It’s a shame she only came out for a couple of chapters. I was hoping that she would come out a bit more but the chances of that happening are slim. Maybe she will come back with Suiryu after training to become heroes. One can hope. Another shame is that we didn’t get to see her techniques, she got defeated too quickly… While drawing her I noticed that her design is simple and yet very iconic and cute. The addition of the bells and her hairstyle is a really good touch.

Looking at the One punch man wiki, it seems that Lin Lin was supposed to be Suiryus sister, so I guess there were more plans for her…