I actually had most of this done since Friday, except the last two scans but I kind of took the weekend off to think and rest a bit, so sorry for those who were awaiting the latest updates.

I’m quite surprised I was taking as long as I was to color the background. As expected dealing with darkness is quite tough, especially when not doing a stylistic approach to it. I had to really think before adding any colors and going over and over (repeating many times) till I had the right shades in place and then eventually adding darker areas around the parts that were supposed to have light both from the light sources and the light being reflected on the ground. I really wanted a shiny floor no matter what since I don’t really deal with such backgrounds due to knowing how hard they are but in the end I decided to go at it anyway. Over all despite the amount of time it took and cont less retouches I felt pretty confident on what I managed to bring forth. Now it is time to actually focus on Lynn Minmay herself which I had a hard time deciding on what color scheme her clothes would have. I actually did quite a couple before scrapping them and coloring them over with what she has now.

In the scans she looks quite darker than in real life, and the hair having no color surely doesn’t help things either. But trust me it shouldn’t look too weird once I have everything else in place. I’m hoping on finishing this tomorrow, here’s hoping it goes along well. 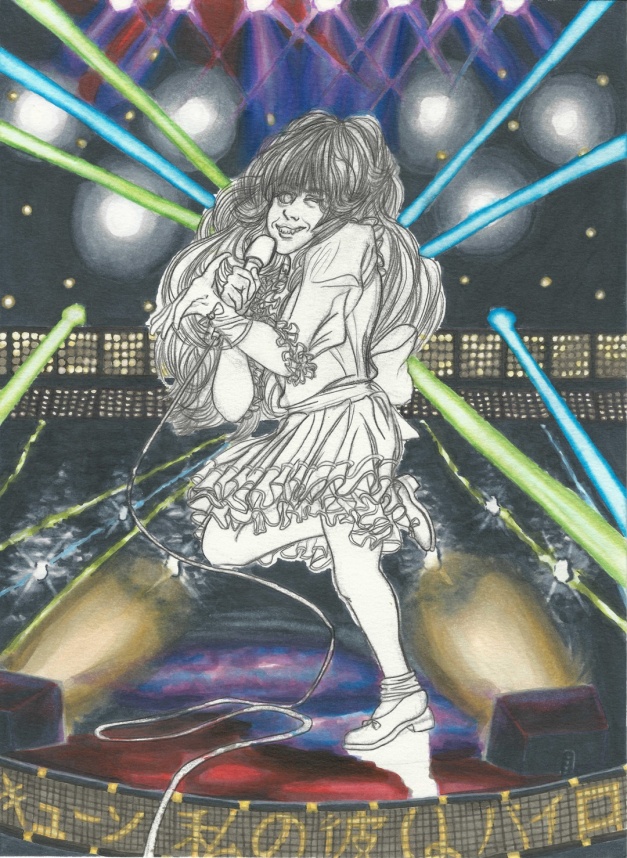